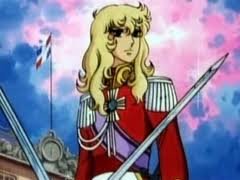 Born the last of five daughters to the Commander of the Royal Guards, General de Jarjayes (a real historical personage), Oscar is raised by his father as a boy in order to take his place and command the Royal Guards serving at Court after he retires. At the age of fourteen, as soon as his training in the basic military skills is complete, Oscar is given the task to protect the Dauphine Marie Antoinette when he arrives at the French Court.

Despite being raised as a boy and dressing in males' clothes, Oscar is curious about presenting more feminine. Even as he explores his femininity, he uses his male position to gain freedoms that he could never have as a lady of the court.

He is the love interest of both André Grenadier , his servant at the Jarjayes mansion and afterwards a soldier in his regiment, and Marie Antoinette, who he acts as a bodyguard to. He also earns the admiration and love of Rosalie Lamorlière , and in turn calls Rosalie his "spring breeze". Other women are infatuated with Oscar, even after he tells them that he is female. He dislikes the court intrigues, but remains there out of loyalty to his father and his friend, Marie Antoinette. At one point, Oscar falls in love with Hans Axel Von Fersen, who has a forbidden love for Marie Antoinette.

Soon gaining the Dauphine and Queen-to-be's friendship and trust, Oscar experiences life at Versailles and the pain caused by the complications of being born a woman, but still being considered a man by everyone, including himself. Later in the story, Oscar learns of the political ideals of the Revolution and that the royalist regime is corrupt. As the French Revolution is about to begin, Oscar refuses to sedate tumults occurring in Paris. He renounces his status and his regiment joins forces with the people marching to the Bastille. Shot by soldiers inside the fortress, he dies right before the prison falls, but not before seeing a white bird flying over him, indicating that bird is Andre, who died the night before his death, waiting for Oscar to come with him to Heaven. They are buried together on a hill.

Oscar was originally a supporting character to Marie Antoinette, and was created as a female because Ikeda was unsure if she could accurately portray a male soldier. Oscar eclipsed Marie Antoinette in popularity and due to reader feedback became the main character. Eri Izawa suggests that as Oscar is fictional, Ikeda could be freer in the portrayal of Oscar's life than Ikeda could be in the life of Marie-Antoinette, who had to die on the guillotine. Oscar's androgynous persona is based on the actresses who play male roles in the Takarazuka Revue and Princess Sapphire, and he was named for Oscar Wilde, as Ikeda is a fan of his work.

Retrieved from "https://rose-of-versailles.fandom.com/wiki/Oscar_Francois_de_Jarjayes?oldid=4409"
Community content is available under CC-BY-SA unless otherwise noted.